How mass layoffs & global recession are going to change the hiring trend in 2023? 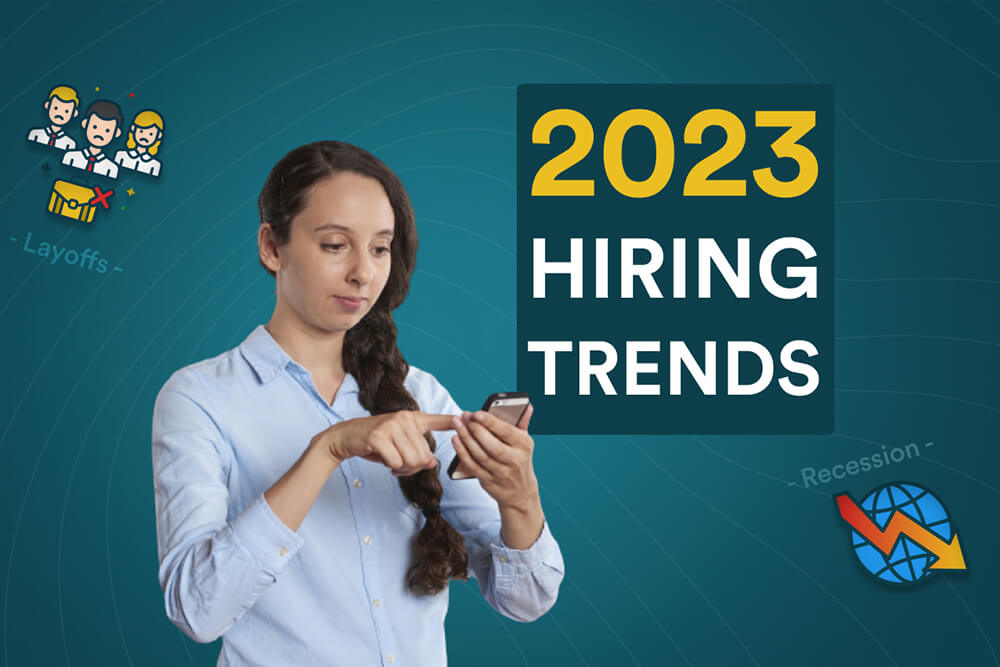 The impact of layoffs and the hiring freeze in the current year 2022 has imparted a state of insecurity and confusion in employees’ and jobseekers’ minds.

What holds in the year 2023 remains tickling in everyone’s mind.

Well, we are unsure of the recession scenario! But there are reports that we can rely on and stay optimistic.

In the 2023 State of IT, which is an annual report on
IT Budgets and Tech Trends, indicate strong tech spending in 2023. 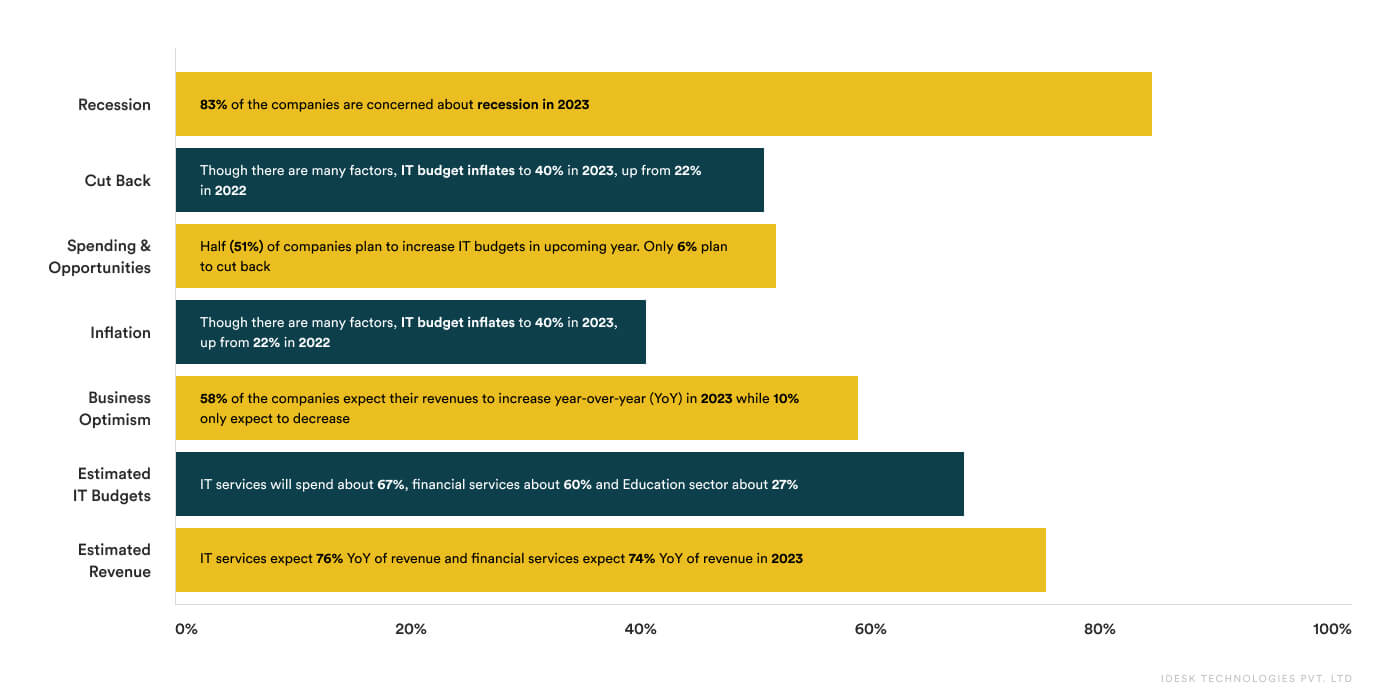 Increasing fear about the recession:

83% of the companies are concerned about recession in 2023

50% of organizations plan on taking precautionary measures to the forthcoming the economic slowdown in 2023.

Barely half (51%) of companies plan to increase their IT budgets in the following year 2023. Only 6% plan to cut back on tech spending.

Organizations have planned to increase their IT budgets in 2023.

IT services will spend about 67% ,financial services about 60% and Education sector about 27%.

Enterprises are more likely to expect YoY revenue growth in 2023. 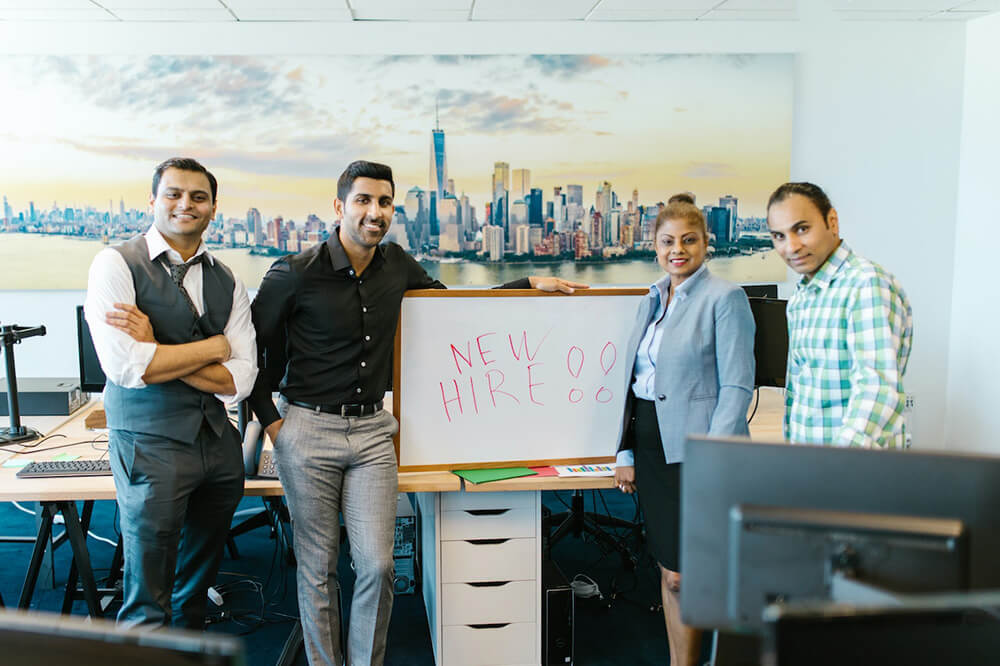 Indian IT companies are planning to cut back hiring amid Europe, and America recession fears. Many Founders and CEOs of IT companies in India have said that companies need to be cautious over macroeconomic uncertainties.

Attrition in IT companies in India remains about 20% amid recession fears.

According to a report by Times Of India, Infosys, TCS, HCL and Wipro hired just 28,736 people in the second quarter of the current financial year which is nearly half of the hiring in the same quarter in the financial year 2022. HCL was recorded with the highest attrition rate of 23.8 %.Tata Consultancy Services (TCS) announced that attrition is 21 per cent in Q2FY23 while it was 19% in Q1FY23. The freshers who were hired earlier in the year were delayed with the onboarding process.

While announcing the financial results of the current year , the management of these top companies told that hiring of freshers will be continued as there will not be any impact of the macroeconomic factors

Milind Lakkad, chief HR officer at TCS, said that 10,000 more freshers will be onboarded in the second half of FY23.

HCL CEO C Vijaykumar, on the other hand, said that they would add 30,000 freshers in FY23. Wipro CEO Thierry Delaporte said that the company has decided to “really build” their strategy to hire freshers, according to TOI.

Companies plan to keep a check on the number of hires as each hire is countable and responsible for their growth.

They tend to hire generalists instead of specialists in a particular field. Recruiters and Talent acquisition heads are keen on planning whom to hire for their requirements from the pool of candidates.

Even though there are some impacts in months of October, November and December, Stay doughty and keep yourself in action. Be mentally prepared that jobs will linger again in the mid of January 2023. Though the opening may sound few the companies spending on IT has been around 57%.

Use the break to self check yourself for improvisation. Rekindle your old relationships. Connect with friends, relatives, college alumni, former co-workers, people of your community and social media friends to build your network. Get references if you need to instead of responding to job advertisements in newspapers.

Grab help from the recruiters of your field. Showcase them your talents, accomplishments, experience, technical intelligence, work history and communications skills.

Since recruiters have to hire a good potential similar to you to show their client for them to keep their job at intact. A good hire amidst the few job opening benefits the company inturn the recruiter and job seeker.

Jobseekers can try out their chances in Startups for the growth of the company and their self growth.

Keep Trying!!! Recession is not forever in the world with new blooming technologies!!!

Auto-scheduling for interviews: How to solve scheduling hassles?

How Interview As A Service helps in scaling the tech team?

How mass layoffs & global recession are going to change the hiring trend in 2023? Join our newsletter to stay updated with us.